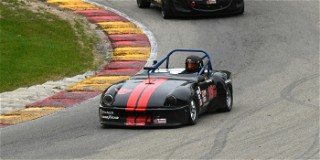 Steve Sargis, of Frankfort, Illinois, drove away from the H Production field for his eighth win at the SCCA National Championship Runoffs® on Sunday at Road America. Mark Brakke, of Coon Rapids, Minnesota, and William Trainer, of Lake in the Hills, Illinois, joined Sargis on the podium.

The trajectory of the race changed almost immediately when, on the first lap, leader Christopher Schaafsma slid through the kink, hitting the wall on the right side of the track while under attack from Sargis’ No. 18 Carbotech Triumph Spitfire. Schaafsma walked away unhurt, but the contact resulted in oil on the track and field was brought to pit lane for a black flag.

The race restarted with 15 minutes and 30 seconds to go in the timed race with Sargis, Brakke and Ralf Lindow the top three, and without Tire Rack Polesitter Daniel Meller who retired from the race due to mechanical issues of his own.

Sargis ran away for the final six laps of what became a 40-minute timed race, winning by 10.380 seconds. In 36 career Runoffs starts, Sargis now has 19 podium finishes. This year’s winning car, now a limited-prep car in H Production, was the same chassis that he drove to his last win—eight years ago, that time in F Production.

“It’s good to be here,” Sargis said. “It’s good to be there with that car. It was a project to put together a limited prep H car so my kids could go through driver’s school, and both of them have done that.”

At the restart, Sargis had a basic plan—but not much beyond, other than to push hard.

“I thought if I could get to the carousel before anybody else, I could put a little bit of space between me, because my car does that easy,” he said. “You really just don’t know what’s going to happen. You have to make it up as you go along.”

Brakke, who crossed the finish line second in his No. 04 Mazda2, was assessed a penalty after a post-race inspection, which dropped him to the back of the pack.

Trainer marched his No. 7 Scirocco to his second-career podium, and first since the Runoffs left Road America in 2013. Trainer was 10th on the grid, fifth on the restart and made his way the rest of the way to the podium after a battle with Mike Origer and Lindow. With the release of official results, Trainer took home second place.

“It had been a very frustrating week,” Trainer said. “Qualifying for me didn’t go well and I missed the third qualifying session. I knew the car was good, I just never had a chance to show it. Today, it came together. There’s never a better time for that. The competition this year, I thought was really good. But the car felt really good. It loves the cold weather and it was just so much fun.”

Mike Origer was next across the line, for a third place trophy at his second podium finish—and second appearance—at the Runoffs. He finished second at this same track in 2012 in H Production.

Lindow and Greg Gauper came home in fourth and fifth, respectively. Tom Broring drove from 19th and last on the grid to finish 10th and earn the Sunoco Hard Charger in H Production.