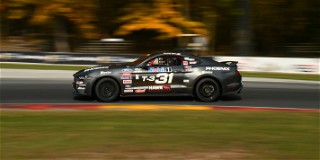 This year’s Tire Rack Pole Award winner was 2018 T3 champion and 2019 runner-up Marshall Mast of Denver, Pennsylvania driving the No. 31 Phoenix Performance/Hawk/Hoosier 2019 Ford Mustang Ecoboost. Mast put in a record-breaking qualifying lap of 2:29.757, a full half-second faster than his nearest competitor. Even so, the top three qualifiers were all under the existing qualifying track record for the class.

On the outside of the front row, the second-place qualifier was Jason Ott, hailing from Littleton, Colorado in the No. 09 Alpine Autosport 2004 BMW Z4 M coupe. 2016-17 champion Derek Kulach of Albuquerque, New Mexico started the race in third position driving the No. 05 Fiesta Auto Group/G-Loc/Hoosier 2007 Nissan 350Z Nismo. Defending 2019 champion Broderick Bauguess, from Columbia, South Carolina, sat outside Kulach with his No. 44 Morehead Speed Works 2001 BMW Spec E46 in fourth place.

As the field came to the green, Kulach took a look to the inside, but Mast had plenty of power to make it into the fast right-hand Turn 1 in the lead, with Ott right behind him. From the start, Mast and Ott pulled away, opening a substantial gap in the first minutes of the race. Kulach took up third position, leading Bauguess and Runoffs veteran Rob Hines of Arlington, Virginia in the No 4 Hoosier/G-Loc/Nissan 2007 Nissan 350Z Nismo.

During the second lap, a fence-damaging hit required track workers to perform some repairs, and that put the field under caution, and then under an extended pause in the pit lane. All Runoffs races are scheduled for 13 laps to cover a racing distance of 52.624 miles, or a maximum of 40 minutes. After losing about 10 minutes in the pits, the SCCA stewards stopped the clock with 20 minutes, 37 seconds left in the race.

“It wasn’t fun [waiting in the pits], that’s for sure,” Mast said after the race.

The field left the pits at 10:55 a.m. for a single-file warmup lap, followed by a restart with almost exactly 16 minutes left to race. Ott pulled alongside Mast on the front straight, working at what would be his only chance to grab the lead, but Mast went deep in Turn 1 and reclaimed his advantage. For the rest of the race, Mast was consistent and made no mistakes, extending his lead a little bit every lap. Behind Mast, Ott also ran out ahead of the pack.

The battle for third place was the story of this race, with past champions Bauguess and Kulach trading positions, and then Hines coming up from his sixth-place grid position. In the sixth lap, Kulach began to fall back as Hines challenged Bauguess for the last spot on the podium. Hines took over third place in Turn 5 on the seventh lap, with Bauguess filling his mirrors and looking for a way back around. The three contenders went nose-to-tail in a three-car drift through several corners in the ensuing laps.

As the white flag flew, Mast maintained his perfect composure, driving a clean lap ahead of Ott. Bauguess made a heroic move through Turn 2 and into Turn 3, making it past Hines to briefly claim third, but Hines drove two wheels into the grass on the way down to Turn 5 to reclaim his place. The two went side-by-side again out of Turn 5, but Hines held the lead into Turn 6. Bauguess was all over Hines through the Hurry Downs and Carousel, but put two wheels in the dirt at the Kink, allowing Hines to pull out about a car length.

Mast took the checker with almost 8 seconds to spare in front of Ott, and another 5 seconds back to Hines. Bauguess finished fourth and Kulach held on for fifth place.

“We had an awesome race today. We just had a knock-down, drag-out fight,” Hines said. “In the early laps I tried to make my way forward. It was great racing, and he [Bauguess] was very courteous. When he dropped two wheels off at the Kink, I knew I had it.”

Ott, who drove a clean race and made no mistakes, was philosophical: “I think the caution hurt us a bit,” he said. “I knew to have any chance, I had to make it on the restart. We were set up for the long run, but I’m not sure if I had anything for Marshall today.”

From Mast’s point of view, the race went as expected: “I knew Jason would be coming hard at the restart,” he said, “but I hung it out and the rest of the race went pretty well. I have to thank all the volunteers out there who make this all possible.”