McMahan Back to Back for Formula 500 Crown at Road America 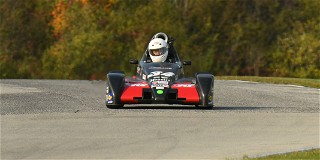 A season ago, Clint McMahan talked about his effort to be “inch perfect” on his way to his second Formula 500 National Championship at the SCCA National Championship Runoffs. Mechanical troubles made that impossible on Friday at Road America, but that became its own reward when he crossed the stripe 0.584-second in front of James Weida for back-to-back titles. Calvin Stewart, of Novi, Michigan, finished third.

McMahan, of Covington, Georgia, and his Satellite Racing team spent a lot of time working on the No. 34 Satellite Racing/Jim Murphy Scorpion FDS 007/Suzuki during the Runoffs week and had just a fourth-place spot on the starting grid to show for it. That went out the window early, as McMahan moved into the lead by Turn 5 of the opening lap.

Once out front, the now three-time champion opened up a lead on the field, stretching the margin to 6.2 seconds by mid-race. At the conclusion of the 13-lap race, that margin was a shrinking half-second.

“This whole week was pretty much a disaster,” McMahan said. “I prepared the car as best I possibly could before I ever left the house. We went through two sets of wheel bearings for whatever reason. I had a break line pop. The chain popped off three different times. It was just one thing after another. It was totally unexpected.”

That gap closed quickly in the latter half of the race as Weida, of West Lafayette, Indiana, cleared a four-car battle that included Stewart, Aaron Ellis and Eric McCree in a chase for the podium. When Weida cleared Stewart for second on lap seven, he turned his attention to running down McMahan.

Weida’s No. 22 Formula X-1/Weida Apartments Scorpion S1/Rotax—the only two-stroke 500cc motor in a lead pack of 600cc motorcycle engines—turned the fastest lap of the race in 2:21.391 (103.067 mph) on lap nine and kept the pressure up. The checkered flag few too soon for Weida, however, and he earned his fourth career podium finish in second place.

“It’s always good to be on the podium, you’ve done something right,” Weida said. “I’ve had worse days than this, for damn sure. I wanted to try to stay up front, but I got shuffled back pretty quick. I had to battle back. Eric, Cal and Aaron, we were really going at it. We’re all clean racers and we gave each other plenty of room. It was fun. But I knew I had to get by them to have a chance at Clint. I finally did, but it just didn’t work out.”

Stewart, the Tire Rack Polesitter, thought he was in position to chase down McMahan from second until lap seven when, in the battle with Weida, he locked his tires going into Turn 5 under braking and dropped back to fifth place. Stewart rejoined the fight and crawled back to his fourth career podium finish.

“I’ll take a third to these guys,” Stewart said. “I was hoping we could give Clint a good run for his money today, but we had a little bit of a problem going down into Turn 5. I was up in second place and just overcooked it, I had just a little too much front brake bias in. My bad. I made a couple of adjustments and the car came back in and started braking better. I made it back up to third, but by then I wasn’t in contact.”

Ellis and McRee held on for fourth and fifth, respectively. David Vincent earned the Sunoco Hard Charger after improving from 13th on the grid to ninth at the finish.