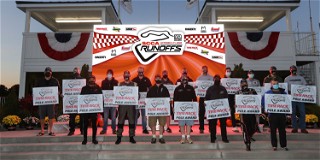 Thursday evening brought an end to qualifying for the 2020 SCCA® National Championship Runoffs®. With that, 26 Tire Rack Pole Award winners are slated to lead their respective classes to the green flag over the next three days as nearly 600 competitors do their best to earn a Summit Racing Equipment SCCA Road Racing National Championship on Road America’s 4.048-mile, 14-turn circuit in Elkhart Lake, Wisconsin. The Tire Rack Pole Award winners each receive a commemorative sign and lapel pin, a certificate of achievement, and $500 to spend at Tire Rack.

The largest field at this year’s 57th Runoffs is Spec Miata (SM) at just short of 80 entries. Chris Haldeman, in the No. 128 X-Factor Racing/Sunoco/Mazda Miata, had the top qualifying time early in the week, only to be bested by the No. 42 Danus Utilities/East Street Racing machine of Preston Pardus. But it wasn’t until Thursday that the SM pole was sealed when Kyle Greenhill turned a 2:42.209 in the No. 142 Advanced Autosports/BlackhawkMotors Miata to earn his very first Tire Rack Pole Award in only his second Runoffs appearance.

With one entry short of 60 competitors, Spec Racer Ford Gen3 (SRF3) is the second largest race class this year at the SCCA National Championship Runoffs. Tuesday’s top qualifier was Franklin Futrelle in the No. 97 Comprent Motorsports car, who was then supplanted Wednesday by the No. 61 PM Racing sled of Brian Schofield. But when qualifying was complete Thursday evening, the fastest time turned was a 2:29.786 -- and that belonged to TJ Acker in the No. 62 MBI Racing SRF3 racecar, his first Tire Rack Pole Award.

Dan Meller’s lone Runoffs championship came in 2009 at Road America, but his lap of 2:39.695 in the No. 64 Core Consulting Nissan 210 earned the Tire Rack Pole Award in H Production and gave him a leg up on a second title at his home track.

Jesse Prather’s third career pole sets the stage for him to lower the E Production track record, qualifying at a blazing 2:27.332 on Thursday. The No. 34 JPM/Hoosier/Carbotech/Sunoco BMW Z3 will lead a full field of Mazdas and BMWs, which comprise the first 11 spots on the grid, to the green flag on Saturday.

Ethan Shippert held the F Production Tire Rack pole provisionally on Tuesday and Wednesday, saw it fall to Kevin Ruck midway through Thursday’s session, and then regained the top spot in his No. 55 Jim Manning Dodge Lotus Super Seven on his fourth of six laps completed. Shippert’s 2:31.414 places him first, with two-time champion Ruck’s Acura alongside him.

Jeffrey Bartz and his No. 33 Pure Energy Racing Van Diemen RF00 Honda had the Formula F pole after day one of qualifying. On day two it was the No. 61 Rice Race/Group6gear.com/Susi Unl Mygale SJ12 Honda of Simon Sikes who went fastest. Sikes then went out on Thursday and lowered his time to a 2:22.916, which earned him a Tire Rack Pole Award on his first trip to the Runoffs.

In Formula 500 (F5), Calvin Stewart and his No. 07 Sabbathtruth.com/Hoosier Novakar Blade F600 Suzuki claimed his second Tire Rack Pole Award. The No. 22 Formula X-1/Weida Apartments Scorpion S1 Rotax of James Weida made things interesting Wednesday by setting the fastest lap, but Stewart came back and turned a 2:20.954 on Thursday, which is a new qualifying record for F5 at Road America.

Formula Vee saw reigning champion Andrew Whitston set the fastest time Tuesday in the No. 12 Protoform car. Hunter Phelps-Barron, in the No. 113 Barron Racing/Noble Engines Mysterian M4, then turned a lap of 2:43.994 on Wednesday, which nobody bested Thursday, thus earning Phelps-Barron a Tire Rack Pole Award in only his second Runoffs start.

Andrew Aquilante earned the 15th and 16th Tire Rack poles of his Runoffs career on Thursday, taking the top spot in both GT-2, driving the No. 33 Phoenix Performance Chevrolet Corvette, and Touring 1 behind the wheel of the No. 33 Phoenix Performance Ford Mustang. With the fast qualifying sessions, Aquilante broke a tie with Joe Huffaker to move into second place on the career Runoffs pole position leaders list, still nine behind Jerry Hansen’s all-time lead.

Hot on his heels on the all-time charts is Mike Lewis, who scored his 12th career Tire Rack pole with a Runoffs record lap of 2:21.882 in the GT-3 No. 32 Goodyear Mazda RX-7. And in GT-1, defending Runoffs champion Ernie Francis Jr. grabbed his first Tire Rack Pole Award with the No. 198 Breathless Racing Ford Mustang based on a 2:02.936 qualifying lap Thursday, which is a new qualifying record for GT-1 at Road America.

Joe Moser, in the No. 36 Hoosier/King Motorsports/Carbotech Honda CRX Si, was atop the leaderboard in Super Touring Lite (STL) the first two days of qualifying. But on Thursday, defending STL champion Danny Steyn and his No. 9 OPM/Nelson/G-Loc Mazda MX-5 put down an STL qualifying record lap of 2:31.420 to claim his third straight Tire Rack Pole Award while Moser sat parked with engine difficulties.

James French is no stranger to Road America, living just down the road in Sheboygan. He’ll lead the Prototype 1 field to the green flag after a lap of 2:01.101 jumped him to the Tire Rack Pole Award during Thursday’s final qualifying session. It’s French’s first career pole in the No. 46 Swift 014 Toyota. Then in Prototype 2, Robert Iverson’s time of 2:08.514 in the No. 4 National Guard Ligier JS49 Honda from Wednesday’s qualifying session held up during Thursday’s 22-minute session to give Iverson his second career Tire Rack Pole Award.

The Sports Car Club of America® National Championship Runoffs® will again include free, live video and audio broadcasts online at SCCA.com Oct. 9-11 from Road America for all 26 races. Online video coverage, presented by Mazda, will occur at SCCA.com with veteran announcer Bob Varsha being joined by Runoffs broadcasters Ryan Myrehn, Tom O’Gorman and Larry MacLeod while Heyward Wagner covers pit lane. Audio commentary all three race days is provided by the Super Tour Radio presented by Hoosier Racing Tire broadcast team consisting of Mike Wolfe, Bob Steele, Andy Delay, Brian Donati and Gregg Ginsberg. That audio race call will be heard trackside across the Road America public address system and 87.7 FM, as well as at SCCA.com. Along with the audio feed, SCCA.com/live will have live timing and scoring for all race days.