Lanes of Runoffs Legacy Through Paddock 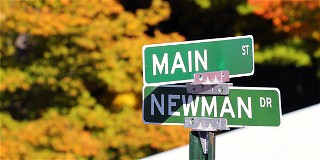 If you’ve attended the SCCA Runoffs in the past few years, you’ve likely seen some street signs throughout the paddocks, helping participants find their way, while also giving some kudos to those who have shaped the history of the Runoffs. The list of roads has gotten a little longer since the signs made their debut at Mid-Ohio in 2016, but the accomplishments recognized have not diminished.

Aquilante Alley: Andrew Aquilante has earned 14 poles and nine National Championships at the Runoffs… and counting. He’s joined in the sport by his father Joe, Uncle Tom and cousins Amy and Beth, making the Aquilante name synonymous with success in the Touring, GT and American Sedan classes.

Bovis Blvd: The Bovis name is synonymous with SCCA and Road America. George served as Chairman of the SCCA Board of Directors and on the Road America Board before his passing earlier this year. His son Chris is well known, too, as a three-time Runoffs National Champion.

Daughtery Drive: With 10 Runoffs wins, David Daughtery is tied for third on the overall wins list. His titles have come in four different classes, most recently B-Spec at Indianapolis Motor Speedeway in 2017.

Carmichael Street: Former fighter pilot Dan Carmichael won back-to-back C Sports Racing Championships in 1969-1970, but he is best known for winning Formula Atlantic in 1995 at the age of 76, making him the oldest driver to win a Championship at the Runoffs.

Beasley Blvd: Between father, Al, and his sons, Al Jr. and Ben, the Beasleys have won eight National Championships and scored 26 podiums in their C and D Sports Racing cars.

Prather Place: Father Kent Prather has eight National Championships, and son Jesse has three of his own. While Kent specializes in British sportscars, Jesse has made a name for himself with Miatas. Both are known as top engine builders, making their accomplishments away from the track just as impressive as their wins on the track.

Lewis Lane: Michael Lewis has won nine National Championships between GT-3 and GT-1, tying him for fifth on the all-time wins list. This week, he’s aiming to move up on that list, running in GT-1, GT-3 and GT-Lite.

Finch Lane: David Finch has grabbed six National Championships in GT-2 along with nine pole awards. On the other side of the fence, Finch worked with the Club Racing Board to develop its Single Inlet Restrictor program.

Hansen Road: Nobody has more Runoffs poles (25) or wins (27) than Jerry Hansen. He also holds the record for winning and pole percentages in at least 10 Runoffs appearances, 72.9% and 67.6% respectively.

Heinricy Place: John Heinricy sits second on the all-time win list with 15 National Championships. His 2001 Touring 1 victory was the first time the margin of victory at the Runoffs was greater than one lap. That started a five-year win streak in T1, the fourth longest in Runoffs history.

Huffaker Highway: After growing up as the lead wrench for his father’s team, Joe Huffaker Jr. finally got behind the wheel, winning 10 National Championships between his F Production Midget and GT-5/Lite Mini.

Ira Ave: Brothers Greg and Cliff Ira have 13 podiums and three wins between them at the Runoffs in the last 12 years. Greg is most identifiable in his orange Datsun 240Z, while Cliff has been piloting an Acura Integra most recently.

Newman: SCCA’s most famous National Champion was four-time Runoffs winner Paul L. Newman. Between his acting career and humanitarian work, Newman’s name is known around the world outside of racing, and cherished within the community.

Noble Way: Bill Noble was a Formula Vee innovator, building 25 National Championship-winning engines, and driving to five Championships himself. Bill embodied the spirit of SCCA competition—he’d build you the best engine he could and then go out and beat you.

Rettich Road: Scott Rettich has 14 podiums and six National Championships in the last 10 years at the Runoffs. When his helmet is off, he’s the CEO of Alliance Autosport, fielding competitive cars in SRF2, FE2, and more.

Rahal Road: Father Bobby and son Graham have both won Runoffs Championships en route to successful IndyCar and professional sports car careers. Despite their professional accomplishments, both still tout their time in SCCA racing and support the Runoffs.

Sargis Street: With 11 poles and seven championships, Steve Sargis is also the Road America track record holder in both F and H Production. He’s well-known throughout the paddock for his fast Triumph Spitfires and gentlemanly demeaner.

Sharp Drive: Famous for his race team, which partnered with Paul Newman, Bob Sharp also won six Runoffs Championships as a driver. His teenage son Scott began his storied career in SCCA as well, winning at the Runoffs three times in the late 1980s.

Tracer Trail: Tracer Racing teammates Chuck Billington and Tom Foster each scored seven National Championships, with the team being inducted in the SCCA Hall of Fame class of 2011. Aside from their success on track, they embodied the spirit of fun, friendship and fellowship off the track.

Varacins View: Michael Varacins has an astounding eight poles—six consecutive—and seven Championships over a 12-year period in Formula Vee, tied for third most.

Weber Way: Having run two and three classes in some years, nobody is even close to Mark Weber’s 57 career Runoffs race starts. He has also photographed the Runoffs for 50 years and is retiring at the end of this week’s event.