2020 Workers of the Year Recognized at Runoffs 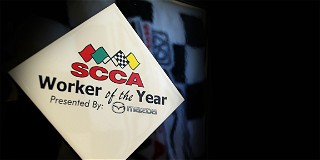 From regional racing to U.S. Majors Tour events, Hoosier Racing Tire Super Tour weekend to the Runoffs, Summit Racing Equipment SCCA® Road Racing is made possible thanks to the enormous effort of SCCA workers. Each year, a handful of workers are recognized for their tremendous contributions. Those individuals are bestowed with Worker of the Year honors, presented by Mazda.

“This has certainly been a challenging year. But once again, the passionate volunteers who put their heart and soul into this Club have united under very adverse conditions to execute the seemingly impossible,” said Mike Cobb, SCCA President & CEO. “Worker of the Year awards recognize only a handful of these dedicated volunteers. To the winners and absolutely everyone who made 2020 Sports Car Club of America events happen, it’s simply impossible to thank you enough for your passion and involvement.”

Award recipients have shown dedication throughout the season to their specialties, events, regions, competitors, fellow workers and the SCCA; exhibited strong skills, good leadership, and a willingness to go above and beyond what is expected; and provided excellent customer service to everyone encountered. SCCA members submitted Worker of the Year nominations, and winners were selected by the SCCA National staff with input from Division leadership.

Normally, Worker of the Year award recipients are feted during the annual All Participant Party held Thursday night during the Runoffs. This year, however, COVID precautions deemed it necessary to cancel that gathering. Instead, awards were presented individually throughout Wednesday as SCCA staff trundled around Road America to surprise people with the news that they’d been selected as a Worker of the Year.

Flagging & Communications Worker of the Year

Brian Sill of Texas Region. An SCCA member since 1980, he has served as Chief and Assistant Chief at the Runoffs for many years. Brian is dedicated, humble and seeks only to serve rather than seeking the spotlight. In a year of uncertainty, he has provided stability to his specialty. His service to both Texas region and the Runoffs has been crucial in maintaining continuity of our sport this year. He has worked to adapt standard practices to fit our current environment and innovate so the F&C team can accomplish its mission. Leadership can present in many forms but for this worker, it shows up in his hard work, willingness to do any task, and love of camaraderie.

Pit & Grid Worker of the Year

Dan Soiney of Milwaukee Region. Dan got his start with Sports Car Club of America at a young age. He’s been a member since the mid-‘80s, and SCCA for him has been a family affair. Now, Dan brings his own family to events so they can work together. He has a patient and understanding temperament but brings a lot of fun with him to every event. Dan is quick on his feet, observant and proactive. He has a great attitude, is innovative, and portrays the kind of fun experience the SCCA strives to deliver at events.

Race Administration Worker of the Year

New England Region’s JB Swan. His passion is evident at events where he’s always on the move solving issues and making sure everyone has what they need. This year, COVID forced change. JB accepted the challenge and delivered. After losing half the Region’s season in 2020 due to pandemic-related cancellations, JB helped the Region come back to a successful, partial season with appropriate changes to event operations and format. He even helped organize the social part of an event to keep it safe and friendly—yet distanced. He has brought together a great team, and works with them to make sure events are something the Region is proud of, and that drivers and workers both want to return to in the future.

Registration Worker of the Year

Kat Beimel of the Blackhawk Valley Region. Though she is relatively new to the registration scene, Kat has quickly come up to speed on the specialty, taking on many leadership roles, including Regional Administrator. She has become a familiar face at nearly all of the events in her Division, where she serves as either Chief or Assistant Chief, including for the Runoffs this year. Kat handled an exceptionally large two-day Cat in the Kettle event this year and, as usual, handled it with grace while striving to give participants the perfect, lasting “first impression.” Described as pleasant, tolerant and supportive, she has gained the respect of drivers, crew and volunteers.

Tech Worker of the Year

Bill Etherington of both the South Jersey and Central Florida Regions. Bill has been very active in multiple regions and served as Line Chief at the Runoffs. He has made every Runoffs for the last decade, helping with Production and other areas as needed. Now residing in Florida, Bill still works many events up and down the East Coast, returning to his old stomping grounds and tech crew—nicknamed “Men in Black”—which he was instrumental in forming. In a pandemic year, Bill stepped up and agreed to be the Chief of Tech for the 2020 Runoffs—a familiar role for Bill as he was Runoffs Tech Chief from 2010-2012. The epitome of a true, dedicated SCCA member and scrutineer, Bill is well-liked and respected by competitors and fellow volunteers alike.

Start Worker of the Year

Dave Hermann, Blackhawk Valley Region. During this unpredictable year with a constantly changing race schedule, Dave has been there for the majority of races to make sure his specialty was covered, no matter the host region. If there was a worker shortage, Dave was there. This year through the pandemic, he has faithfully fulfilled any and all duties requested of him, including being the Chief Starter for the largest regular season event this year. Dave’s calm manner and skilled leadership make it a great time for all who work with him, and his work ethic and willingness to serve has been a bright spot in a very difficult year.

Steward of the Year

Jim Rogaski of San Francisco Region. For more than two decades, Jim has served on committees, drafted rules and applied those rules. Jim’s own experience behind the wheel only strengthens his ability to understand what it’s like to put on a helmet and walk in a driver’s race shoes. This special combination has contributed to his success in bridging the gap between stewards and drivers. Jim’s calm, logical approach to racing, paired with his silly sense of humor, has earned him the respect and trust of all who work and interact with him. His most recent accomplishment comes after nearly a year of work and collaboration that has resulted in one of the most significant additions to the GCR and Road Racing program in recent history—the creation of Racing Rules and Passing Guidelines.

Timing & Scoring Worker of the Year

Diane Carter of the Houston Region. Having joined the Club in 1999, Diane is a timing and scoring powerhouse. Gracefully, she manages large fields with the usual number of bad or missing transponders, ugly numbers, and numerous changes on an opening day, rarely showing any signs of frustration and never breaking a sweat. And she typically does it all with a small staff of just her and two helpers. Diane is adaptable, friendly, smart, extremely capable—and often finds a way to also compete in B-Spec, Spec Miata or Super Touring Lite during many events.

Emergency Services Worker of the Year

Milwaukee Region’s Steve Dunkmann. He is a long-time member who holds three different specialty licenses, but Emergency Services is where he shines. Steve is detailed and thorough, making sure everything is in place and ready for the green flag to drop. He always shows up ready to work and fills in wherever is needed. He can step into the Captain seat of a truck or serve supporting roles when asked. Steve enjoys being around a good crew of people and soaks up the excitement and fun of racing.

Honorees receive a commemorative plaque, patch and jacket, as well as an SCCA Gear merchandise gift certificate. From the pool of winners, one name was randomly drawn to receive the grand prize courtesy of presenting sponsor Mazda. That prize, an all-expense paid trip to either the Rolex 24 at Daytona or Mobil 1 Twelve Hours of Sebring, goes to Steve Dunkmann. Thank you again to all who made the 2020 SCCA Road Racing season possible.