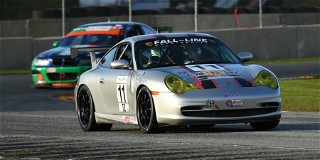 During Wednesday’s Town Hall Club Racing Board meeting conducted at Road America, the B-Spec community learned that the Hankook Z214 will be the official spec dry tire for all B-Spec cars, beginning June 1, 2021. With the introduction came the announcement of a significant contingency program to reward top finishers.

Each car in the class will run on a 205/50-15 sized tire during dry races. Wet tires remain open but require a 200 treadwear rating.

During Majors and Hoosier Super Tour races, drivers can earn two tires for a race win, up to one tire for a runner-up, and as much as $50 in credit for a third-place finish, dependent upon the number of starters in the race.

As for next year’s Runoffs at Indianapolis Motor Speedway, if more than 10 B-Spec drivers attend the Runoffs, Hankook will pay out eight tires for a win, six for a silver medal, four tires for bronze, a pair of tires for fourth through sixth place, and one tire for every remaining finisher up to 18th place. Additionally, Hankook will provide full event support at the Runoffs, with technical support at select other events during the 2021 season.

The second of three qualifying days has concluded for the 57th Sports Car Club of America® National Championship Runoffs®. Below are provisional qualifying leaders across the 26 different classes with driver name, hometown, SCCA region, car and fastest lap time. A full rundown of qualifying results can be found at https://www.scca.com/pages/2020-scca-runoffs-results.

Audio-only coverage of Runoffs qualifying continues Thursday morning from Road America in Elkhart Lake, Wisconsin. Commentary Thursday will be provided by the Super Tour Radio presented by Hoosier Racing Tire broadcast team with Mike Wolfe, Bob Steele, Andy Delay, Brian Donati and Gregg Ginsberg providing coverage of Tire Rack Pole Day. Audio commentary can be heard trackside and on 87.7 FM for those lucky enough to be on site at Road America. For those elsewhere, follow Runoffs qualifying at SCCA.com or the Performance Motorsport Network.