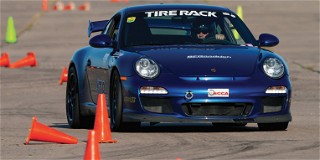 This article first appeared in the June, 2020 edition of SportsCar Magazine. Everyone can read the current and past editions of SportCar digitally here. To become an SCCA member and get SportsCar mailed to your home address monthly in addition to the digital editions, click here.

Mid-engine placement is the ideal for pavement-racing automobiles, period. In every series where they have a choice, that’s where the engine ends up. But why?

Originally, cars were motorized horse carriages, and they usually mounted the Chitty Chitty Bang Bang single cylinders under the seat. Undoubtedly, they soon discovered what a high center of gravity meant, not to mention serviceability – reaching under the seat and luggage area was a pain. Still is. For instance, the engine is completely hidden on the Porsche Boxster. Impossible to see. Oil is checked electronically on the dash, and you fix everything from underneath.

As you know, most cars ended up with their engines up front since, well, a long time ago. Why? Well, because burning gasoline is hot, and the front end gets the most cooling breezes. You set a radiator right there in front of the engine, the hoses are short, and the radiator cap is conveniently just ahead of you where you can see if – when – it boils over. Further, trying to carry large loads up front means you won’t be able to see over them, and that doesn’t work so well, either.

Many racecars are based on street cars, so for the above reasons the engine was up front, too. Another factor is the tricky task of getting power to the wheels. Front engine usually meant a nice, simple, strong rear axle. Mid or rear meant a transaxle would be necessary, combining the transmission and the final-drive axle into one. The articulating driveshafts these required were very difficult to build with early materials and technology. It was a long time before this was accomplished economically and effectively for higher power outputs. Like, well into the 1960s (Corvette, Jaguar).

Rear-engine placement was popular for a while due to its low cost and convenient packaging but driving one fast can get dicey. No one put the engine back there to maximize performance. Everyone put the engine in the middle for that purpose, however. Colin Chapman and his Lotus racecars were early adopters in their day, and it worked.

Why, then? Mid-engine placement has two strong advantages for going around corners and racetracks quickly. Let’s take a look:

As a car turns for a corner, the front engine is just like an ice skater’s extended arms, a long way from the car’s center of rotation into the corner, its rear axle. It takes a lot of energy to pull that front weight into the corner, making the car relatively slow to turn as well. This is even more obvious if the engine and trans are mounted way up front, like many classic American cars, and most all front-wheel-drive cars. So, what can slow the steering response is not so much just the weight, but the fact that it’s a long way from the rear axle, so it’s harder to change its direction. These cars like going straight. This is often the cause of “plow.” Or, on the positive side, stability.

Now hop into a mid-engine car, like the newest C8 Corvette. When that car turns, it’s like our Olympic ice skater with arms drawn close to her body. The weight of the engine is close to the rear axle and it is much easier to pull into the corner. The car turns faster and with less effort.

So, what’s the downside? Well, the car sometimes can turn so fast that it’s difficult to control – it’s twitchy. Easier to turn means easier to spin, as well. Mid-engine cars are much more difficult to drift for this very reason – they rotate very quickly. Maybe too quickly. This is one reason why several of today’s high-performance cars have a compromise: front engine, rear <I>transmission<I>, shooting for some of the best of both worlds: quickness, power down, and stability.

Try this easy demonstration right where you are. Hold your arms straight out in front of you. You are now a front-engine car. Better yet, hold something in your hands – water bottles, your briefcase, a baby. Now (lovingly) swing Junior left-to-right, turning at your waist (which is like the rear axle). Baby will love it! How does that feel? Now draw Baby close to your chest and make the same twisting 90-degree turns. How does that compare? <I>That<I>, my friends, is how a mid-engine car feels in comparison to a front-mounted one when entering a corner. It’s more responsive. Easier. More precise.

Combine this with my famous drag-fingers-lightly-across-desk, then-push-down-and-try-it-again demo. When you lean on your fingers, you can feel the increased traction from the weight. That’s what having the engine and trans over the rear axle does for your tires under acceleration, and one reason why the Z51 C8 Corvette will beat the much more powerful C7 ZO6 Corvette from 0-60mph.

Now imagine a rear engine – hello 911! The extreme rear weight bias is great for traction under power and can really help the rear tires do more braking, but that PMI is now swinging ‘round out back. Your entry rotation now has more momentum and wants to keep going. If you could hold Baby out behind you and do that side-to-side motion while you face forward, that’d be the feeling of a rear engine. Another downside is that the front is very lightly loaded under power, so when you lift off, there’s a huge change in front grip. Porsche has done a terrific job of adjusting for this over the years; huge rear tires, roll toe-in, and tight shock dampening to slow the swing of that rear PMI. But they must constantly hold the mid-engine Cayman and Boxster back (less power, strut suspension) lest the mid-engine little brother outrun the superstar 911.

So, choose your polar-moment poison, and go tear up an SCCA track party whenever it’s possible – and I’ll see you there!