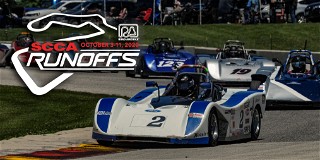 The Sports Car Club of America® National Championship Runoffs® will again include free, live audio and video broadcasts online at SCCA.com Oct. 6-11 from Road America. However, viewers will get to enjoy a new member of the video broadcast team as longtime motorsports commentator Bob Varsha jumps in as one of the anchors for the 2020 Runoffs race calls.

“Although I’m delighted to be joining the broadcast team for the Runoffs for the very first time, it still feels like coming home,” Varsha said. “I was a regular spectator when this great event was based at my home track, Road Atlanta. By joining the Runoffs broadcast this year, I have the chance to tick a key box on my motorsports bucket list at long last. Making it even better is the fact that I’ll do that at one of my favorite circuits in all the world: Road America! So many of the professionals I’ve covered in my nearly 40 years in this business came through the ranks of SCCA racing, and I can’t wait to meet the current membership in October at America's National Park of Speed!”

Free, live, online video coverage of Runoffs races, presented by Mazda, will occur Friday, Oct. 9 through Sunday, Oct. 11 at SCCA.com. Varsha will be joined by returning Runoffs broadcasters Ryan Myrehn, Tom O’Gorman and Larry MacLeod while Heyward Wagner again provides coverage from pit lane. For the twelfth year in a row, video coverage will be handled by Apex Broadcast.

Audio-only coverage of Runoffs qualifying will be available for free each day from Oct. 6-8 at SCCA.com. Commentary will be delivered by Gregg Ginsberg, Wagner, MacLeod and O’Gorman on Tuesday and Thursday. Audio commentary switches for Tire Rack Pole Day and all three race days to the Super Tour Radio presented by Hoosier Racing Tire broadcast team consisting of Mike Wolfe, Bob Steele, Andy Delay, Brian Donati and Ginsberg. That audio race call will be heard trackside across the Road America public address system, as well as at SCCA.com and on the Performance Motorsport Network. Along with the audio feed, SCCA.com/live will have live timing and scoring for all qualifying and race days.

Below is the Runoffs race schedule. All listings are Central Time and subject to change. Each race is 13 laps or 40 minutes, whichever comes first.

The SCCA National Championship Runoffs has evolved into what is now commonly agreed to be the pinnacle of American motorsports. Since 1964, the SCCA has crowned Road Racing’s National Champions at the winner-take-all, single race Runoffs format through dozens of separate races over three days. This year, the 57th Runoffs will return to the 4.048-mile, 14-turn circuit at Road America in Elkhart Lake, Wisconsin. Spectator tickets for the 2020 Runoffs are on sale now.