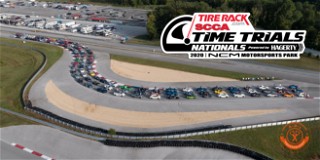 For KONI Podium honors, finishing positions were calculated based on the competitor’s top TimeAttack lap on Friday, the best time in both the morning and the afternoon TrackSprint on Saturday, and Sunday’s flying lap in the small group TimeAttack. The four times, added together, marked the winners.

Class winners were as follows:

Eric Powell and his Mazda Miata earned the top overall time and a free entry into the 2021 Global Time Attack Super Lap Battle at Circuit of the Americas. Kevin Gu was named “Top Novice” after finishing fourth in the T5 class, 6.979 seconds off the class leader.

Holley Performance dished out a string of $200 gift certificates during the weekend. Based on the times in the Track Sprint portion of the event only, Brian Peters (Chevrolet Corvette) earned Top GM, Steve Luca (Ford Mustang) earned Top Ford, and Kyle Carrick (Nissan GT-R) the Top Import. Holley also awarded Michelle Quinn the Most Improved and Matt Busby the Workers’ Choice, selected by staff and event volunteers.

DJ Alessandrini was selected as the Breakthrough Performer for 2020, after transitioning to Time Trials from autocross and eMotorsports, while Elias Espinal – who saw his car destroyed at an event last year before Time Trials Nationals and was back and ready to go this year – earn the Spirit of Time Trials. Dennis Barrett was named the Time Trials Champion for attending each of the three Time Trials Nationals so far and bringing a growing group of friends as competitors each year.

Finally, the coolest award goes to Cassandra Light, who was named the Hagerty Keepin’ It Cool Award winner for her enthusiasm in volunteering and commitment to making sure every participant she saw was having a great time. She was awarded a YETI cooler to thank her for her commitment.

Results and more information from Time Trials Nationals, including the overall quickest times, can be found here.