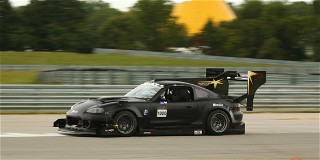 News and notes, stories and ramblings, all from the paddock at NCM Motorsports Park during the Tire Rack SCCA Time Trials Nationals powered by Hagerty this weekend.

Track Sprint Day: If Friday was all about the traditional go-fast lap, and Sunday is the same thing in a shorter time period, Saturday is the day that event might be won or lost.

Track Sprint has the potential to change the game. Everyone will set a best time on two courses – which are actually just a small portion of the full NCM Motorsports Park course.

The Track Sprint rewards handling, eliminating much of the long straights at NCM Motorsports Park. Look for some movement among the class leaders today.

Park It In P1: Taking a look at the time sheets at Time Trials Nationals, a few things stick out. Like, how in the hell is a Mazda Miata ahead of the Vipers, Camaros, and Corvettes?

The short answer is the simple one. It’s actually more of a “Mazda Miata.”

Bobby Kostopoulos, of Kostopoulos Autosport, had a vision – to build the ultimate Time Attack car. And while he may not quite be there, he’s got a good start on it.

“We race in E Production, so we race,” Kostopoulos said. “We race Porsches. The brainchild behind this was to race something that was less expensive to run. A car that was low maintenance to drive. A car that has a lot of support. The vision was to build a Time Attack car. I drew it out on paper before I ever started, to scale. And here we go.”

Here they go, for sure. It takes a couple of looks to realize that there’s a Mazda under there – though the tub and shape are certainly there. The long dorsal fin that runs the length of the rear deck to the giant wing looks like an IMSA Prototype car. The front of the car has a large splitter and wing plates that would envy any GT3 machine.

“It does have a flat floor, but we ended up having transmission boiling problems so we took the center out,” Kostopoulos said. “Some aero bits underneath that we’re still developing.”

The power, however, might surprise some – just the stock V6 from a 2017 Chevrolet Camaro. At least for now, that is – future plans call for some kind of forced induction, TBD.

Every piece is meticulously placed, as if it came from the factory. But that’s the type of detail that makes a car like work.
And while “budget” might be a relative term in motorsports, this really is a budget build amongst friends.

“I have a team that complements all those different aspects of this build,” Kostopoulos said. “My brother Paul is CCP Fabrication. He specializes in composites. Very good friends of mine are from V8 Roadsters. This is their platform. This is what they do. They specialize in suspensions to motorswaps, all that stuff. I have a driver that is God’s gift to us, Eric Powell. Between all that, and my background in automotive technology and import cars, it came together.”

Even the power comes at a steep discount.

“The motor and transmission that I got is out of a brand new car. Something had fallen on the roof, which allowed me to get it from a salvage yard. It had five miles on it, so it’s a brand new drive train.”

Mostly, though, it came straight from Bobby’s brain.

“It’s definitely a budget build,” he said. “There’s no CFD (computational fluid dynamics), there’s no wind tunnel stuff, there’s nothing done. I just tried to do my research. I read a lot of books, I did a lot of internet searching. What worked for this guy or that guy, what was proven, and I tried to implement it.”

And it works. Matched up against the heavy horsepower in the U1 class, Powell was still quickest overall on the first day of lapping.

“Future plans are to continue to develop the car,” Kostopoulos said. “We want to get the aero nailed down. Whatever little teething we have here and there. And the car needs more power. I’m surprised that we’re able to keep up with the guys we’re keeping up with, and Eric is phenomenal at the wheel of this car. But to really compete at this level, we need a little more power. At some point we’re going to force induce it in one way or another, either turbocharging or supercharging.”

Look out for it – you won’t want to miss it.

Not At All Shock-ing, KONI Loves Time Trials: Not only does KONI make great suspension components, but those components are made by enthusiasts who love what they do. That’s why they get involved with the SCCA Tire Rack Time Trials program, ranging from the KONI Novice Group to the KONI podium at the end of the weekend.

Take Lee Grimes, Automotive Product Manager for KONI North America, for example. Grimes has been to SCCA’s Tire Rack Solo Nationals, he’s been to road racing’s Runoffs, and he’s a regular at Time Trials events. Why? Because it has a personal and professional connection.

“KONI’s involvement started with the very first announcement of what TTN might be,” Grimes said. “We knew immediately hearing about it that we really needed to be a part of it. This is our core group. It’s enthusiasts. It’s experienced drivers and its new drivers getting early times on track. That’s a group that KONI really wanted to be a part of and let people know about our brand and our product. We’re really happy to be involved since day one and wanted to be here.”

And this program really is different.

“Time Trials Nationals definitely has a different feel about it because it’s got the whole “one team” mentality,” Grimes said. “Everybody is on the same team and everybody is here to have a good time. I’ve been road racing for many years and you’re absolutely on the very edge and if a guy comes up behind you, the last thing you want to do is let him by. But here at Time Trials, if somebody comes up behind you, you’re on his team. You give him a point, you move over and you give him a chance to have a good lap. It’s really a different mentality and it’s really fun.”

And the event isn’t a one-trick pony, which fits right in with KONI’s reputation for both performance and comfort.

“I also like the fact that we’ve got track sprints, we’ve got full open lapping sessions,” Grimes explained. “It’s kind of a best all-around cowboy thing that they do in the rodeo business. You don’t have to be absolutely fantastic at every one of them, but if you’ve got a good strength and you can put them together, whether it’s in a street car or a race car, it’s a really good time and you get to compete.”