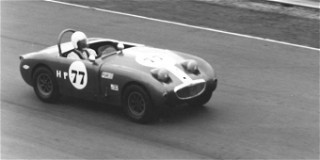 James “Jim” Barbour, who served on SCCA’s Board of Directors from 1992 to 1997, passed away recently in Florida at 94 years old. Joining SCCA® in 1962, Jim’s member number only had three digits. And while numbers saturate Sports Car Club of America® activities -- be it a car number, lap time, grid position, finishing position or points earned -- numbers never really tell the whole story.

Raised in Dayton, Ohio, Jim joined the US Army Air Corp in WWII and was a documented, original member of the Tuskegee Airmen. After the war, Jim worked in the computer industry for Univac, the U.S. Government, Control Data and retired from Digital Equipment Corp.

Jim had a huge interest in sports cars and collected many over the years. An SCCA member for more than 55 years, Jim spent time as a road racer, then became an SCCA official. He also officiated for the Ferrari Challenge and IMSA. In 2018, Jalopnik writer David Obuchowski sat down with Jim to learn about the man everyone considered to be a consummate gentleman, and that article can be read here.

Beyond motorsports, Jim was an accomplished base violinist and loved Big Band Jazz music. In fact, he played in bands off and on throughout his life. He was a man who gave a great deal of support to so many, and he will truly be missed.