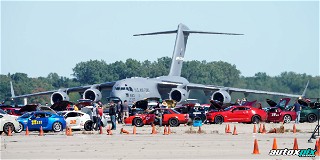 For the second event of the late-season extension to the 2020 Tire Rack SCCA National Solo season, drivers flocked to a nearly full event at Toledo Express Airport in Swanton, OH. As the leaves begin to change in Northeast Ohio, participants bundled up in the mornings but temperatures rose through the day for an enjoyable and mild weekend.

B Street brought the tightest battle of the weekend with a final margin of victory of 0.001 second. On the way to that, Mike Leeder showed the way over Win-hou “Tony” Chow by 0.195 second at the end of Saturday competition. Leeder came out on a mission Sunday afternoon and took the lead from run one. As he chipped away at his own time, Chow did as well. As they crossed the line at the end of their third runs, both setting personal best times, Chow claimed victory by the narrowest margin. Sam Strano and Suart King claiming the third and fourth place trophies respectively.

National Solo competitors are often guilty of flocking to the most competitive car for their chosen class, but every now and then, that status quo is disrupted. That’s what happened on day one in C Street when Kevin Kent piloting his 2005 Honda S2000 to the lead over the flock of Mazda MX-5s in tow. Day two brought the revenge of the Mazdas with Rick Cone taking the class win by 0.345 second over Neil Britton and Lance Keeley. Kent claimed the fourth and final trophy.

It was a close battle at the top of Solo Spec Coupe with Matt Waldbaum and Jimmy Vajdak swapping the lead back and forth all weekend. The pair finished Saturday competition with Vajdak on top by 0.223 second. Sunday morning, both drivers tagged a cone on their first runs, keeping the competition very much alive. On their second runs, Waldbaum cleaned up his dirty lead, but Vajdak struck back on the final runs to take the class win by 0.068 second. Tyler Kvetko and Jeff Jacobs claimed the third and fourth place trophies respectively in the 11-driver class.

F Prepared saw some great variety with everything from a 1972 Porsche 914/6 to a 2002 BMW Z3. Day one ended with David Montgomery and his Porsche leading Tom O’Gorman in a borrowed BSP-prepped Honda S2000 by about a half a second. Montgomery held the lead through the first runs on Sunday morning, but a cone and a DNF in his remaining runs opened the door for O’Gorman who took over the lead on second runs. The final margin of victory was 0.134 second. Eric Peachey co-drove with O’Gorman for the weekend and claimed the third and final trophy in the class.