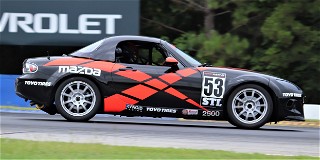 NA, IT, CRB, NB, GT, STL, EP, NC, T4, ND1, SM5, T3, MX-5, ND2, SADEV, SMX … The world of Mazda Miatas can be confusing when it comes to SCCA road racing. To help understand the acronym fest, below you’ll find a piece penned by Club Racing Board Chairman Peter Keane that gives a brief overview of where Mazda’s Miata falls within some SCCA road racing classes. NOTE: You may need to read this article more than once.

As we are all aware, the Mazda Miata is the most raced chassis in Sports Car Club of America® competition. The NA (1990-1997) and NB (1999-2005) chassis are well established within several Club Racing classes including GT, Improved Touring, Production, Spec Miata, Touring and Super Touring. Recently there have been some questions with the new classifications of the NC (2006-2015) and ND (2016-) chassis. I will try to answer the questions by breaking down the cars and classifications.

The NC started out in Touring 4 (T4) in Club Racing and the MX-5 Cup professional series. As the cars aged, they were classified into Improved Touring and Super Touring. In 2011, the SCCA® approved a class called SM5 with a nationally recognized Regional ruleset. Several cars were built in the DC Region, but the classification never really took off. The MX-5 Cup car went directly into Touring 3 and into T4 with non-adjustable shocks. Other NC cars went to Super Touring so they could compete in the U.S. Majors Tour series. Danny Steyn’s fully prepared NC has proven to be a very potent Super Touring Lite (STL) car.

In 2018, Mazda started developing the Spec MX-5 Challenge concept. During the 2018 SCCA Runoffs, Mazda presented the CRB with the new concept and their vision for the class. Mazda’s goal was to provide the club racer with the next generation car package, with chassis consistency and compliance in mind. We agreed that the new SMX class would race in STL for the Majors program under the Mazda-controlled Vehicle Technical Specifications.

Individual regions adopted the SMX ruleset so cars could race regionally in their own class. Mazda increased its engagement to further develop the SMX spec and promoted several marquee SMX Regional events with generous contingencies. At the recent Michelin Raceway Road Atlanta event in July, there were 18 SMX cars. The future of SMX is unknown, but first-year growth is strong in the class.

The newest Mazda chassis is the ND MX-5, classified in Super Touring, Touring and E Production. Most ND race cars built have competed in the Global MX-5 Cup professional series and are filtering into Club Racing. The professional series started in 2016 with the ND1 chassis, and the CRB classified the Global MX-5 in T3 with the pro series ruleset. The ND1 did not have the performance potential for T3. But in 2019, Mazda updated the MX-5 with a new powertrain and designated it the ND2. For 2020, Mazda introduced the SADEV sequential transmission as part of the upgrade option for the ND2. Though it was required to compete in the pro series within the ND2 class, the ND with SADEV is also classified for T3 competition. Recently, the ND1 and ND2 (with standard transmission) Global MX-5 cars were also classified into STL where they should find a good home. There have been 221 Global MX-5 built in the U.S. to date.

Hopefully, this article will help clarify the many MX-5 classifications. As always, the CRB appreciates all member input, which should be sent to crb@scca.com.